Last week was a busy week for me. So busy in fact that I forgot I downloaded a fake news plugin between various meetings. As nothing immediately happened when I installed it, I swiftly forgot as I prepared our content strategy plans for 2017.

END_OF_DOCUMENT_TOKEN_TO_BE_REPLACED

I recently attended the Westminster Media Forum in London and spoke about how we’re engaging younger audiences through Capital FM, PopBuzz and We The Unicorns. I only had ten minutes so it was quite a speedy tour, but here were my notes from the other excellent speakers that presented. END_OF_DOCUMENT_TOKEN_TO_BE_REPLACED

Each year, Web Summit attracts digital enthusiasts from around the world, seeking networking opportunities and juicy thought-leader presentations. This year, however, there seemed to be very little of that, from a content maker perspective at least. The 2016 event in Lisbon was heavy over-subscribed (50,000 attendees was the number quoted) and there was a change in style from previous summits – relaxed sofa ‘chats’ with speakers over detailed analysis. When there was a formal presentation you heard yourself muttering ‘thank god for Power Point’ which is, as you all know, a hideous crime.

END_OF_DOCUMENT_TOKEN_TO_BE_REPLACED

Some hastily scribbled thoughts following the recent US elections. What do US journalists (and perhaps all of us) need to do going forward?

I’m a big fan of Gamestorming – creating really fun interactive sessions motivate participants to focus on a project objective. Using the element of play can be really useful in these instances, as so many of our meetings are dominated by distraction with people answering email on their devices and disengaged. Introducing novel exercises can really counter the monotony of established office routines.

The ‘Pre Mortem’
The exercise I selected from the Gamestorming book was the Pre Mortem – essentially focusing the group on what could go wrong with a project. Asking a group to spend time actively ripping apart a proposed vision or product is actually really fun, and something people aren’t usually asked to do.

Here’s how the hour was organised: 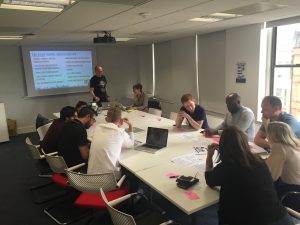 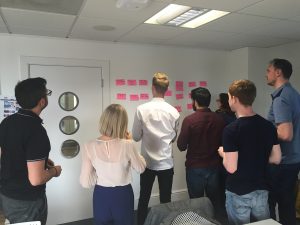 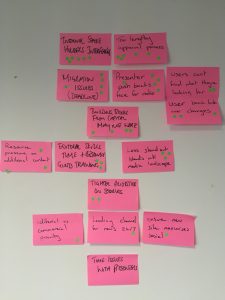 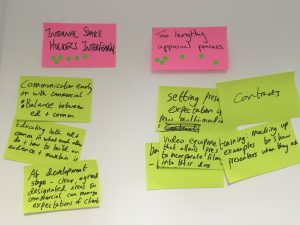 With so many meetings booked in our calendars, many of which overrun or haven’t an established agenda or goal, it’s easy to take the simpliest path – attend, keep participation to a minimum, and then head to the next meeting. With a bit of forward planning, and maybe testing on a few willing participants in advance, it’s possible to create a really constructive session that really bonds the team and helps them see the project (with its many challenges and solutions) in a new light.

We have an exciting new project starting on Heart.co.uk which will involve creating amazing, shareable content in a variety of formats. This person will have a strong understanding of what makes great distributed content so probably has experience of being both a Content Editor and Social Media Guru/Overlord. Other details below.

Please email me your CV and examples of your work.

Denise Welch, we love you.

Reason 573838 why we love @trumanblack momma queen Denise Welch- thanks for the shout out boo! Even if you did call us Pop-Bizz 😂💀 #mattyhealy #the1975 #denisewelch

This week I attended another of Tom Hewitson‘s excellent Content Lab sessions, this time looking at how creative writing exercises can feed into content design. Although Content Strategy/Content Design/ContentMarketing are fairly new disciplines, it’s already fairly easy to follow ‘established’ methods which may not break any exciting new ground. I know that might be controversial so I’ll let that one hang for a while…

Anyway, at the session we had the wonderful Jacqui Lofthouse who took us through a series of exercises like the following:

Apart from being fun session (I rarely go to creative writing sessions) I found the techniques above really focused the mind around what the character thought and felt in a moment in time. The six minute stream-of-conscious approach was also good at fleshing out aspects that might have been easily deleted in the writing process.

You can see how this might be useful in persona-building activities and is certainly something I’d consider with my own team. However, I would have to be careful not to conflate an entirely fictitious character with a user: personas do have a habit of taking on a life of their own. But as a quick exercise to really engage a team around a topic/challenge, this was really fun exercise to explore.

Meet Maria. Now, she has a story to tell… #contentstrategy #ux #uxdesign pic.twitter.com/3nPFew8xqg