Howdy! 🔥  Apologies for the radio silence but with the upcoming UK Election and preparing for Capital’s Summertime Ball, it’s just been a very busy time.🔥🔥🔥  Here’s some of my top reads from the last few weeks. Enjoy!🔥🔥🔥🔥  PS, I’ve just discovered how to add fire emojis to WordPress! 🔥🔥🔥🔥🔥🔥🔥🔥🔥🔥

As we all know, linear TV is really challenged at the moment, but these graphs showing how audiences dwindle over time for top US TV shows were pretty jaw-dropping. As Josef Adalian and Jeni Zhen write:

“We’ve been trained to understand that if we fall behind on several episodes of a show, we can always catch up later on streaming. Binge-watching an entire season is, for many, a better experience than watching week-to-week. The enormous sums Netflix and Hulu are paying to stream shows such as This Is Us underlines just how much value remains in network-TV fare. Sure, as measured by Nielsen, Empire is drawing half as many viewers as it did at its peak a couple years back. Some of those early adopters of the series have no doubt given up on the sudser altogether, but odds are many of those viewers are now simply watching in ways not captured by traditional metrics. (Another “encouraging” sign for the health of broadcast TV: Most big cable comedies and dramas are down, too — even the good ones.) None of this makes the double-digit declines shown below any less depressing for executives. Ratings declines result in fewer overall ad dollars, period. While networks are proving adept at opening up new revenue streams, they’d much rather their Nielsen numbers were going up.”

Elsewhere, I really liked the way the social team at Huffington Post are using their editors to front their coverage of news and entertainment on social. Sounds like a win-win to me.

I thought this article looking at why Alt-Right messages and memes during the French election didn’t work was interesting. Also, kinda reassuring that civilisation can’t be entirely derailed by just anyone with a good knowledge of Photoshop and Google Docs. Well, for now.

“There’s a big cultural gap that these groups have to jump over to expand their message,” said Ben Nimmo, a senior fellow at the Atlantic Council, a think tank, who has studied the far right’s recent efforts in France. “The language and iconography of the alt-right is pretty specific. Most of it just isn’t going to translate well.”

I’m sure you’ve seen this video looking at texting and the internet in film. Just brilliant.

As an avid long-distance runner there’s nothing better than escaping the city for the country, negotiating numerous maps, losing your GPS signal and having to deal with the local farm dogs. Thank goodness for the National Trust Open Data site which launched recently – I now know where I’m bloody going!

Here’s a roundup of top pages I’ve been reading this week:

Teenagers and tweens watching TV half as much as adults, Ofcom finds
“Tweens and teens watch just half the amount of live TV as adults each day, and choose to “top-up” viewing by watching clips on services such as YouTube, Vimeo and Vine, according to new research by the UK media regulator.”

It’s not just about print vs. digital media — it’s about culture
Interesting table included here looking at the differences between legacy media and ‘digital-first’. Worth looking at…

This building is an organism for making newspapers
In the Agile world we often talk about how locating people in an office is just as important to product output as knowledge. With that in mind, take a look at this diagram from a 1920s newspaper company.

Digital Publishing: There’s No Place Like Home
Some choice quotes here:
“According to the analysis, a user who visits a news site directly spends, on average, 4 minutes and 36 seconds per visit, while a Facebook user spends just an average of 1 minute 41 seconds on your site. In addition, direct visitors view about five times as many pages per month as Facebook users, and visit the site three times as often.”

“Even though they’re a smaller percentage of overall traffic, app users listen to much more audio,” said Perry. “Mobile users might visit a couple of pages and stay on the site for five minutes, but our app audience seems more willing to listen to a stream for an hour.”

“Despite the reduction in traffic, newspaper homepages harken back to the historic place the front page of a newspaper had in the community. Forgive me for sidestepping into marketing speak, but editors should think of their news organization’s homepage as their ultimate brand statement.”

How are brands driving TV ad viewers online?
“It’s either a case of brands not understanding the importance of driving TV viewers online or they already assume it’s a pointless exercise because viewers disengage as soon as adverts appear.”

How Technology Is Changing Media
An in-depth look at how BuzzFeed is leading the industry’s trends in social, mobile, and video. 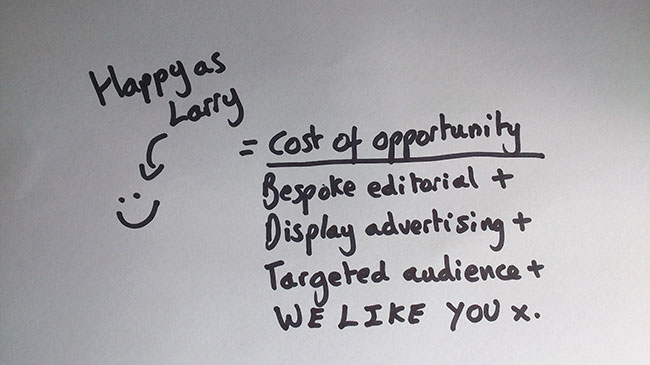 Every day the entertainment industry produces hours of exciting digital content but take a look around the web you’ll find very little discussion around content strategy. Why is that?

Well, it could be because the industry has a great focus on marketing and PR, where it’s all about building up the audience through pre-release campaigns and social amplification of the eventual release. Time is spent attributing a limited amount of exclusive assets to preferred media partners to ensure greatest exposure.

It’s model that has traditionally worked well, the media offers more inventive ways of engaging with their audience in return for time with talent/trailer. No money needs to exchange hands because the formula can be crudely summarized thus: